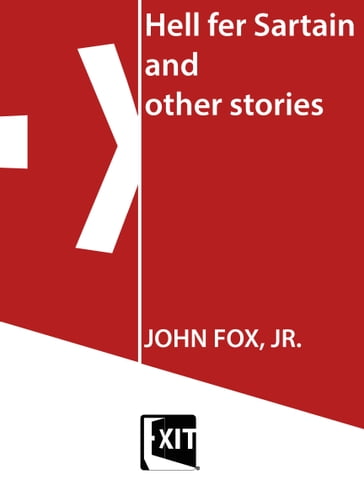 Hell fer Sartain and other stories

Thar was a dancin'-party Christmas night on "Hell fer Sartain." Jes tu'n up the fust crick beyond the bend thar, an' climb onto a stump, an' holler about ONCE, an' you'll see how the name come. Stranger, hit's HELL fer sartain! Well, Rich Harp was thar from the head-waters, an' Harve Hall toted Nance Osborn clean across the Cumberlan'. Fust one ud swing Nance, an' then t'other. Then they'd take a pull out'n the same bottle o' moonshine, an'fust one an' then t'otherthey'd swing her agin. An' Abe Shivers a-settin' thar by the fire a-bitin' his thumbs!

Well, things was sorter whoopin', when somebody ups an' tells Harve that Rich had said somep'n' agin Nance an' him, an' somebody ups an' tells Rich that Harve had said somep'n' agin Nance an' HIM. In a minute, stranger, hit was like two wild-cats in thar. Folks got 'em parted, though, but thar was no more a-swingin' of Nance that night. Harve toted her back over the Cumberlan', an' Rich's kinsfolks tuk him up "Hell fer Sartain"; but Rich got loose, an' lit out lickety-split fer Nance Osborn's. He knowed Harve lived too fer over Black Mountain to go home that night, an' he rid right across the river an' up to Nance's house, an' hollered fer Harve. Harve poked his head out'n the lofthe knowed whut was wantedan' Harve says, "Uh, come in hyeh an' go to bed. Hit's too late!" An' Rich seed him a-gapin' like a chicken, an' in he walked, stumblin' might' nigh agin the bed whar Nance was a-layin', listenin' an' not sayin' a word.

Scrivi una recensione per "Hell fer Sartain and other stories"