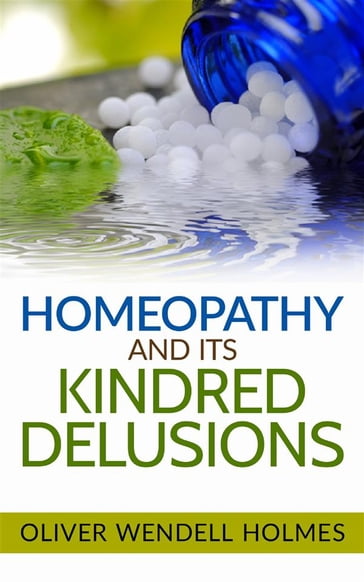 Homeopathy and its Kindred Delusions

When a physician attempts toconvince a person, who has fallen into the Homoeopathic delusion, of the emptiness of its pretensions, he is often answered by a statement of cases in which its practitioners are thought to have effected wonderful cures. The main object of the first of these Lectures is to show, by abundant facts, that such statements, made by persons unacquainted with the fluctuations of disease and the fallacies of observation, are to be considered in general as of little or no value in establishing the truth of a medicaldoctrine or the utility of a method of practice.

Those kind friends who suggest to a person suffering from a tedious complaint, that he "Had better try Homoeopathy," are apt to enforce their suggestion by adding, that "at any rate it can do no harm." Thismay or may not be true as regards the individual. But it always does very great harm to the community to encourage ignorance, error, or deception in a profession which deals with the life and health of our fellow-creatures. Whether or not those who countenance Homoeopathy are guilty of this injustice towards others, the second of these Lectures may afford them some means of determining.

To deny that good effects may happen from the observance of diet and regimen when prescribed by Homoeopathists as well asby others, would be very unfair to them. But to suppose that men with minds so constituted as to accept such statements and embrace such doctrines as make up the so-called science of Homoeopathy are more competent than others to regulate the circumstanceswhich influence the human body in health and disease, would be judging very harshly the average capacity of ordinary practitioners.

To deny that some patients may have been actually benefited through the influence exerted upon their imaginations, would beto refuse to Homoeopathy what all are willing to concede to every one of those numerous modes of practice known to all intelligent persons by an opprobrious title.

So long as the body is affected through the mind, no audacious device, even of the most manifestly dishonest character, can fail of producing occasional good to those who yield it an implicit or even a partial faith. The argument founded on this occasional good would be as applicable in justifying the counterfeiter and giving circulation to hisbase coin, on the ground that a spurious dollar had often relieved a poor man's necessities.

Homoeopathy has come before our public at a period when the growing spirit of eclecticism has prepared many ingenious and honest minds to listen to all new doctrines with a candor liable to degenerate into weakness. It is not impossible that the pretended evolution of great and mysterious virtues from infinitely attenuated atoms may have enticed a few over-refining philosophers, who have slid into a vague belief that matter subdivided grows less material, and approaches nearer to a spiritual nature as it requires a more powerful microscope for its detection.

However this may be, some persons seem disposed to take the ground of Menzel that the Laity must pass formal judgment between the Physician and the Homoeopathist, as it once did between Luther and the Romanists. The practitioner and the scholar must not, therefore, smile at the amount of time and labor expended in these Lectures upon this shadowy system; which, inthe calm and serious judgment of many of the wisest members of the medical profession, is not entitled by anything it has ever said or done to the notoriety of a public rebuke, still less to the honors of critical martyrdom.

Scrivi una recensione per "Homeopathy and its Kindred Delusions"