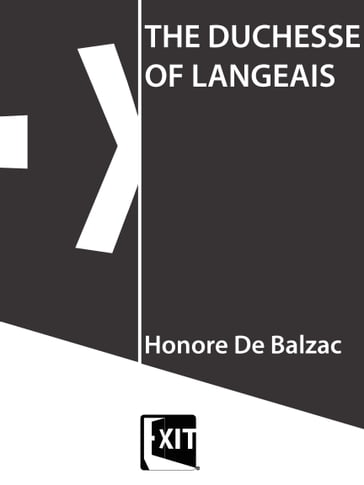 THE DUCHESSE OF LANGEAIS

In a Spanish city on an island in the Mediterranean, there stands a convent of the Order of Barefoot Carmelites, where the rule instituted by St. Theresa is still preserved with all the first rigor of the

reformation brought about by that illustrious woman. Extraordinary as this may seem, it is none the less true. Almost every religious house in the Peninsula, or in Europe for that matter, was either destroyed or disorganized by the outbreak of the French Revolution and the Napoleonic wars; but as this island was protected through those times by the English fleet, its wealthy convent and peaceable inhabitants were secure from the general trouble and spoliation. The storms of many kinds which shook the first fifteen years of the nineteenth century spent their force before they reached those cliffs at so short a distance from the coast of Andalusia.

If the rumour of the Emperor's name so much as reached the shore of the island, it is doubtful whether the holy women kneeling in the cloisters grasped the reality of his dream-like progress of glory, or the majesty that blazed in flame across kingdom after kingdom during his meteor life.

In the minds of the Roman Catholic world, the convent stood out pre-eminent for a stern discipline which nothing had changed; the purity of its rule had attracted unhappy women from the furthest parts of Europe, women deprived of all human ties, sighing after the long suicide accomplished in the breast of God. No convent, indeed, was so well fitted for that complete detachment of the soul from all earthly things, which is demanded by the religious life, albeit on the continent of Europe there are many convents magnificently adapted to the purpose of their existence. Buried away in the loneliest valleys, hanging in mid-air on the steepest mountainsides, set down on the brink of precipices, in every place man has sought for the poetry of the Infinite, the solemn awe of Silence; in every place man has striven to draw closer to God, seeking Him on mountain peaks, in the depths below the crags, at the cliff's edge; and everywhere man has found God. But nowhere, save on this half-European, half-African ledge of rock could you find so many different harmonies, combining so to raise the soul, that the sharpest pain comes to be like other memories; the strongest impressions are dulled, till the sorrows of life are laid to rest in the depths.

Scrivi una recensione per "THE DUCHESSE OF LANGEAIS"