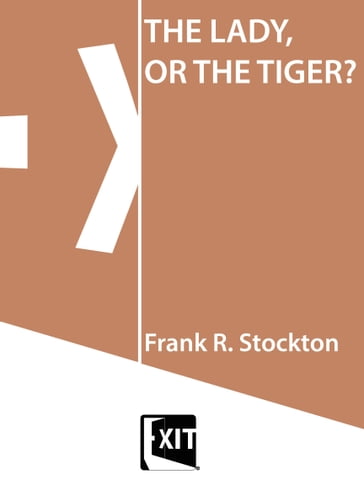 THE LADY, OR THE TIGER?

In the very olden time there lived a semi-barbaric king, whose ideas, though somewhat polished and sharpened by the progressiveness of distant Latin neighbors, were still large, florid, and untrammeled, as became the half of him which was barbaric. He was a man of exuberant fancy, and, withal, of an authority so irresistible that, at his will, he turned his varied fancies into facts. He was greatly given to self-communing, and, when he and himself agreed upon anything, the thing was done. When every member of his domestic and political systems moved smoothly in its appointed course, his nature was bland and genial; but, whenever there was a little hitch, and some of his orbs got out of their orbits, he was blander and more genial still, for nothing pleased him so much as to make the crooked straight and crush down uneven places.

Among the borrowed notions by which his barbarism had become semified was that of the public arena, in which, by exhibitions of manly and beastly valor, the minds of his subjects were refined and cultured.

Scrivi una recensione per "THE LADY, OR THE TIGER?"